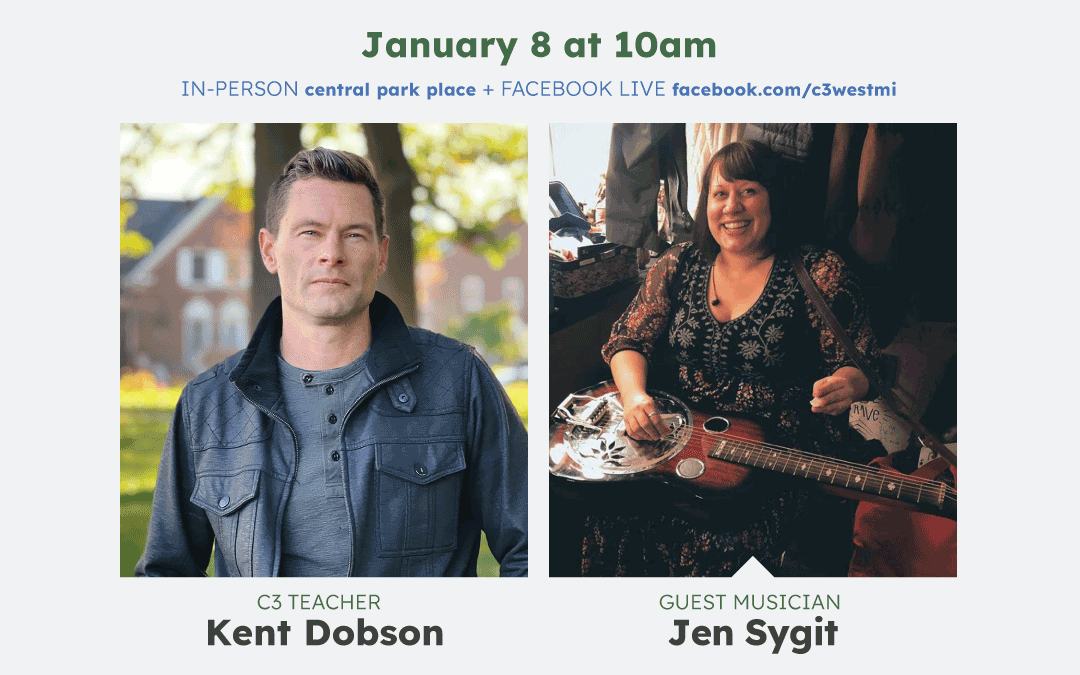 And here we are, already approaching the second Sunday of 2023, and our first C3 Gathering of this new year. On January 8, C3 Teacher Kent Dobsonintroduces our new series with the teaching Saints, Mystics, and Misfits.

Our first Guest Musician of the year is long-time friend of C3, Jen Sygit. Cindy Anderson is scheduled to give the meditation; maybe it will include some insights gathered on her recent trip to Uganda.

We look forward to seeing you for our first Gathering of 2023 at Central Park Place (formerly Grand Haven Community Center) for Pre-Talk at 9 a.m. in the Woodbine Room, the Gathering in the Mackinaw Room at 10 a.m., and Talk Back at 11 a.m. C3 Kids meet at 10 in the Woodbine Room. If you can’t join us in person, you can watch online on C3’s Facebook page.

There is much evidence on several levels that there are at least two major tasks to human life. The first task is to build a strong “container” or identity; the second is to find the contents that the container was meant to hold. The first task we take for granted as the very purpose of life, which does not mean we do it very well. The second task, I am told, is more encountered than sought; few arrive at it with much preplanning, purpose or passion… We are a “first half of life” culture, largely concerned about surviving successfully… The language of the first half of life and the language of the second half of life are almost two different vocabularies, known only to those who have been in both of them.  The advantage of those on the further journey is that they can still remember and respect the first language and task. They have transcended but also included all that went before. In fact, if you cannot include and integrate the wisdom of the first half of life, I doubt if you have moved to the second… People who know how to creatively break the rules also know why the rules were there in the first place.

—Richard Rohr, Introduction to Falling Upward: A Spirituality for the Two Halves of Life