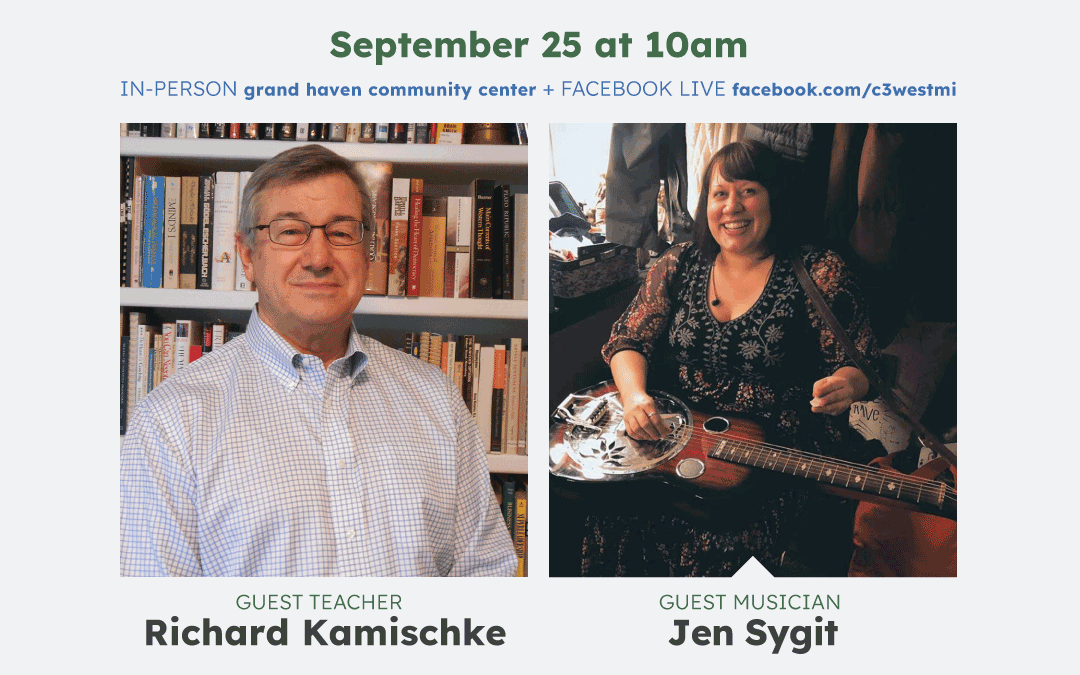 Richard Kamischke is a Michigan native, whose formal education started in physics, the study of matter and energy, and ended in social psychology, the study of small group behavior. He has had a lifelong interest in common ground held by philosophy and religion. Richard has been on the C3 Board and is a recipient of the Phil Koster award.

Jen Sygit is a Lansing, MI based singer/songwriter and multi-instrumentalist with four solo albums. In addition to her solo career, Jen is also a member of the all-female string band Stella!, roots rock band Lincoln County Process and is a veteran back up singer/session vocalist having appeared on over 50 albums.

The Great Questions
What About Death?

The Schofield Kid: [after killing a man for the first time] It don’t seem real… how he ain’t gonna never breathe again, ever… now he’s dead. And the other one too. All on account of pulling a trigger.
Will Munny: It’s a hell of a thing, killing a man. Take away all he’s got and all he’s ever gonna have.
The Schofield Kid : Yeah, well, I guess they had it coming.
Will Munny : We all got it coming, kid.
Unforgiven (1992)

Everything Is Meaningless
1The words of the Teacher, son of David, king in Jerusalem:
2“Meaningless! Meaningless!” says the Teacher.
“Utterly meaningless! Everything is meaningless.”
3What do people gain from all their labors
at which they toil under the sun?
4Generations come and generations go,
but the earth remains forever.
5The sun rises and the sun sets,
and hurries back to where it rises.
Ecclesiastes 1:1-5
Circa 935 BCE